A Gro Intelligence analysis, using satellite data of growing conditions in Russia’s key spring wheat growing districts, suggests that the spring crop will equal, or be slightly below, current USDA forecasts. Any lessening of prospects for wheat in such major producing regions as Russia and the EU brightens the outlook for US wheat exports in coming months. 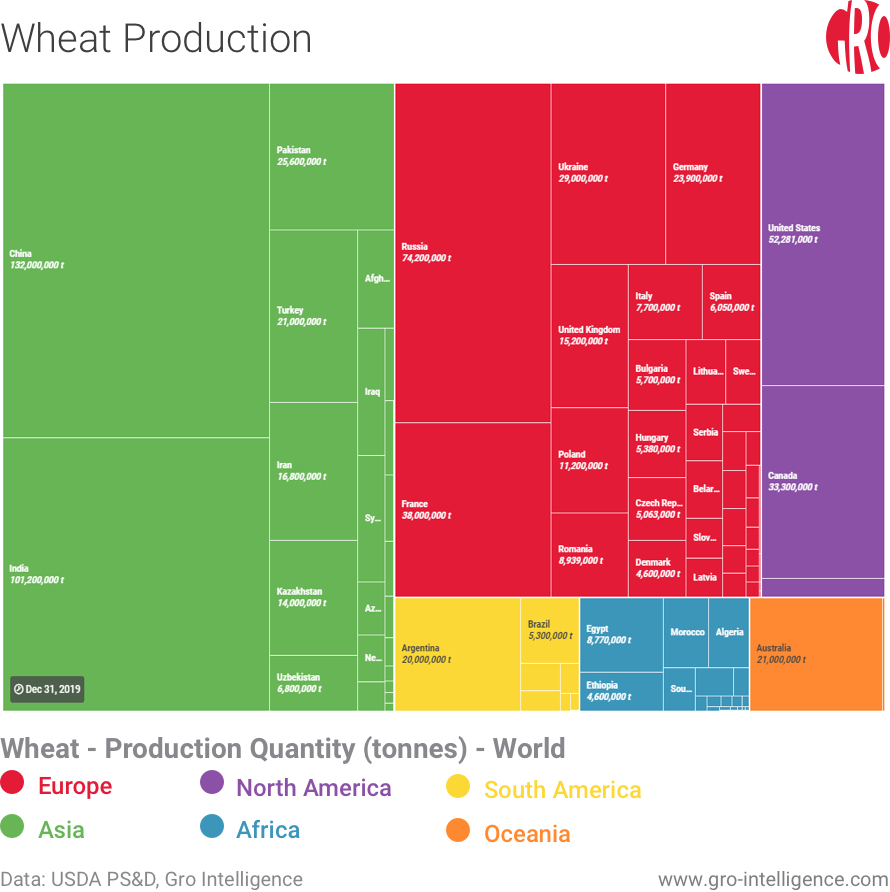 Russia is the third largest wheat producing country (shown in the chart above grouped by continent). With nearly half of its crop going to export, it is the world’s biggest wheat exporter. Production in China and India, Nos. 1 and 2, respectively, tends to stay almost entirely within their respective borders. Click on the image to go to an interactive display on the Gro Intelligence web app.

Russia’s spring wheat crop is much smaller than the winter crop, at 19.2 million tonnes versus 55 million tonnes, according to the latest USDA estimates for 2019. Russian spring wheat is finishing the flowering stage in the important Ural and Volga districts and entering it in the dominant Siberia district. The three districts combined account for about 90% of the country’s spring wheat production.

An in-depth look at vegetative indices suggests there may be limited upside for the Russian spring wheat yield. Our analysis considered temperature, soil moisture, and NDVI for the three Russian districts for the first 15 days of July. We then ran a historical comparison (depending on the environmental metric, the historical data was available for between eight and 19 years) to see how those data related to crop yield.

Daily land surface temperatures in the first half of July averaged 25.9 degrees Celsius. Such temperatures are associated with a much lower-than-expected yield: 1.50 tonnes per hectare compared to USDA’s projection for 2019 of 1.67 tonnes. That 10% difference amounts to a decrease of 1.9 million tonnes of production, assuming the USDA’s projection of 11.5 million hectares is realized.

A more optimistic outlook comes from daily soil moisture readings for the first half of July. On average, moisture constituted 15.2% of each cubic meter of soil for the three Russian districts. This is a favorable sign for production and is associated with a yield 5% larger than what the USDA currently predicts. The implied yield of 1.76 tonnes per hectare would result in 1 million tonnes more spring wheat than the current forecast. 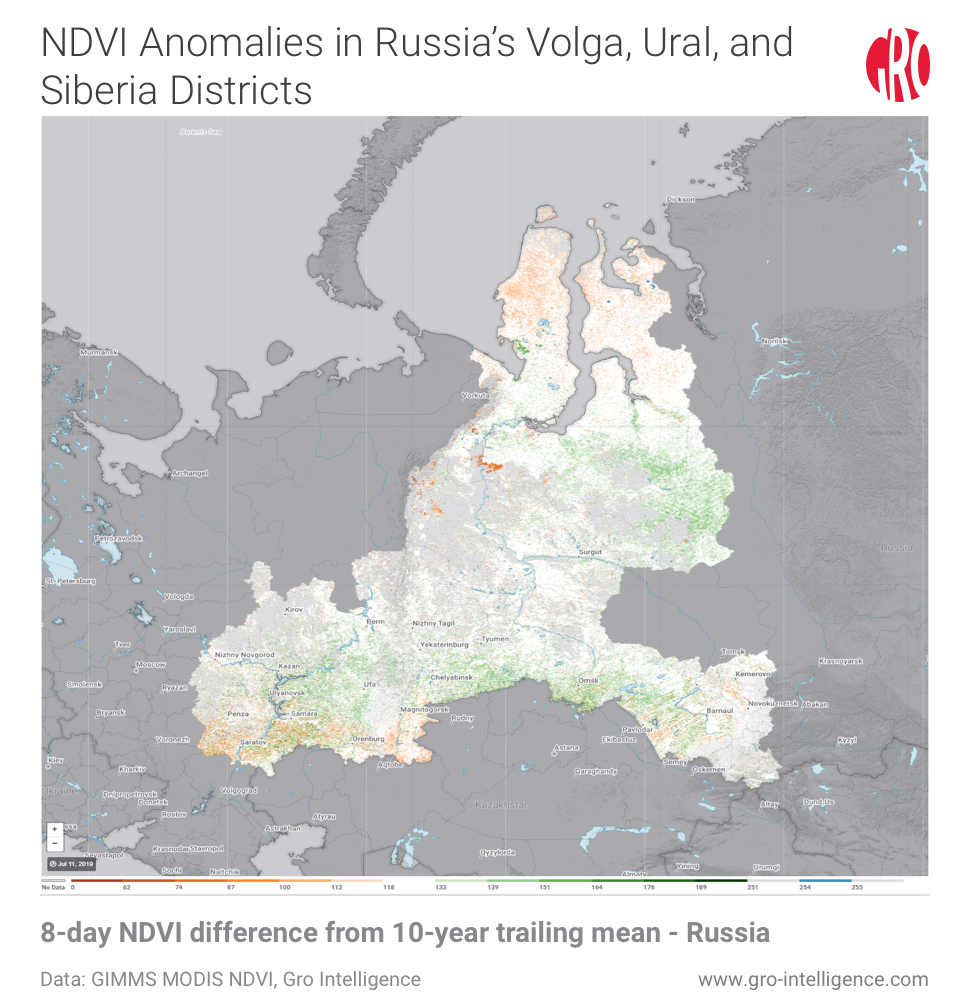 The above map shows NDVI deviations from its 10-year average for the three top-producing Russian districts, which hug the southern border. Compared with their 10-year averages, NDVI readings are less favorable in the Volga area to the west, more favorable in the Ural district at center, and mixed in Siberia to the east. Click on the image to go to an interactive display on the Gro Intelligence web app.

The third vegetative health measure we considered was NDVI, and it implied a more muted adjustment to yield than the previous two metrics. The measure consists of each day’s NDVI’s difference from its 10-year average, and of the three indicators is the most strongly associated with yield. Compared with the USDA forecast, this year’s NDVI deviation suggests a slight reduction in yield, to 1.66 tonnes per hectare in the three districts. That implies production of 19.14 million tonnes, which is just 64,000 tonnes less than the USDA forecast.

This simple analysis could be made more robust to reveal how influential each of the three measures of vegetative health is on ultimate yield and production, allowing a more nuanced weighting of the three. In any case, a simple average of the three results suggests a small reduction of 321,000 tonnes of Russian spring wheat from current forecasts.