Cotton Prices Unravel Under the Weight of Excess Supply

The global cotton market is recently being squeezed from all sides. Production worldwide is topping records, cotton stocks are headed up again, and a trade war between the two largest cotton trading partners, China and the US, is into its second year.

Earlier this month, US December cotton futures prices dropped below 60 cents/pound, the lowest in three years, and a 30% decline from a recent high in May. China’s traders are feeling the brunt, as well, as futures prices on the Zhengzhou exchange recently hit 10-year lows.

The causes for the quick reversal in market fortunes are varied. Production is booming in Texas, where nearly half of US cotton is grown. Some other major producers, including Brazil and India, are also seeing bumper crops. And demand has declined in the two largest consuming countries, India and China, according to data from textile industry groups.

Looming behind it all is the US/China trade dispute. US cotton exports to China are down 39% in the 12 months ended in June from a year earlier, Gro Intelligence data shows.

In this Featured Insight, we assess the state of the global cotton industry using a wide range of data on the Gro platform from data sources around the world. We also analyze cotton supply-and-demand balances to determine what developments to watch for that could pull cotton prices out of their current slump, from pickups in trade flows to deterioration in crop conditions. 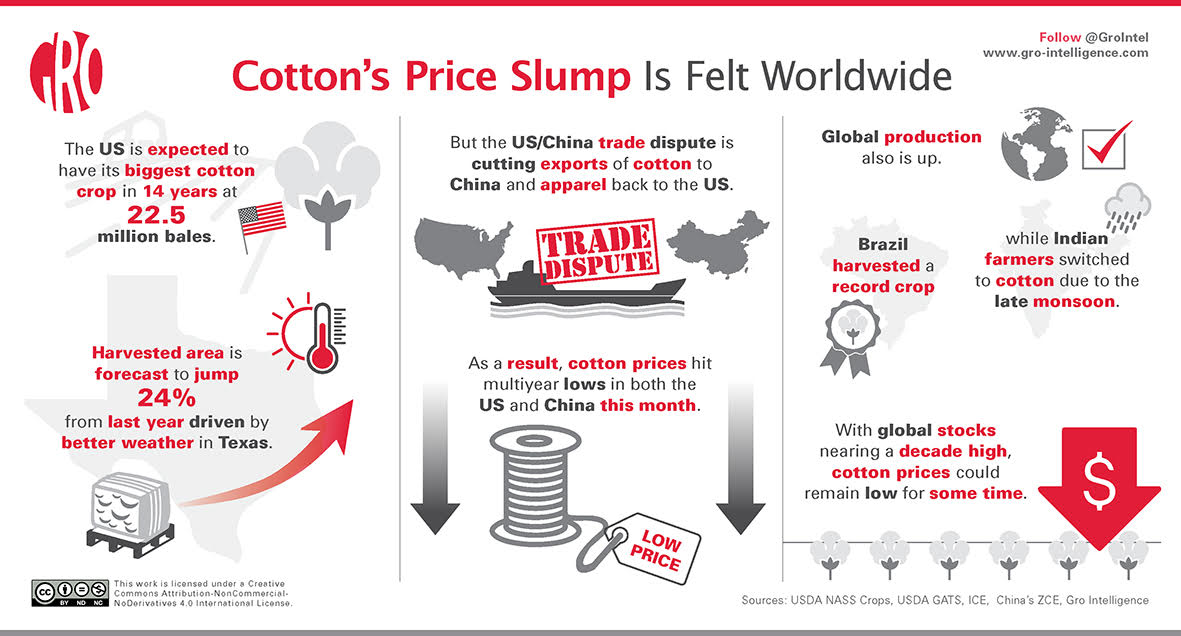 How We Got Here

The US is the third-largest producer of cotton, but by far the biggest exporter, shipping over three-quarters of its production overseas. Vietnam and China are typically the largest buyers of US high-quality cotton fiber. Vietnam and other parts of Southeast Asia continue to expand textile manufacturing, luring some capacity away from the two largest yarn producers, India and China.

In May 2018, the market looked very different than today, with prices at multiyear highs. Weather was threatening major producing areas in Texas and Western China, and a delayed Indian monsoon was followed by extended dry spells. US export commitments were running at record levels.

Then the trade dispute between China and the US became a reality. US export commitments leveled off, while at the same time improved weather boosted US yields. China’s government aggressively sold cotton stocks from state reserves to relieve that country’s high prices.

Prices slowly crept lower over the second half of 2018, but it was not until May 2019 that good production prospects and no end in sight to the trade dispute really pushed cotton prices lower.

US cotton farmers lost a big portion of business to one of their largest customers when Chinese tariffs raised prices for that country’s textile producers. China’s textile makers also face tariffs in exporting to the US. Even as the trade dispute entered its second year earlier this summer, US cotton farmers are expecting a good crop, dealing a fresh blow to prices.

In its latest WASDE report, the USDA raised its estimates for cotton yield, based on the year’s first survey-based production forecast for Texas. (The USDA delayed reporting objective yield surveys for corn, soybeans, and cotton in states other than Texas until September.) The US crop is expected to total 22.5 million bales, the biggest in 14 years. Harvested area is forecast to rise 24%, with Texas leading the way with nearly 2 million more harvested acres than last year. Still, exports are flagging this year, and ending stocks are projected to be the highest since the 2007/08 season.

Cotton is currently being harvested in South Texas, and farmers are saying yields are good, possibly stronger than in 2017. The key for the crop right now is for the weather to stay dry until the harvesting is completely done. Rain will only hurt the crop at this point. Conditions in the rest of Texas and other producing areas are worsening due to a prolonged dry spell. Good-to-excellent conditions for the crop nationally fell 7 percentage points last week, but that hasn’t been enough to get the futures market excited.

The chart on the left shows how variable both the planted area (blue bars) and harvested area (green bars) are in Texas. 2019 planted area is lower than last year, but harvested area is projected to be the highest in history. The chart on the right shows the good-to-excellent conditions for cotton in Texas. The peak of 2019 looked really promising, but ratings have declined recently (green line with markers). Ratings are still well above 2018’s dismal conditions (blue line with markers). Click on the image to go to an interactive display on the Gro web app.

Export sales were strong this past week at 329,000 tonnes (1.5 million bales). But because of the recent sharp drop in price, speculation was high that much of this represented replacement sales, in which buyers cancel existing orders and repurchase at a lower price. Indeed, US export sales would need to be strong for several weeks to change the general view of weak global demand and heavy competition from other origins like Brazil, India, and Australia.

US cotton farmers are struggling. The Market Facilitation Program of government subsidies, meant to help offset the negative impact of the trade war, last year paid cotton farmers at less than half the rate paid to soybean farmers. The 2019 version of the program was reworked and some cotton farmers may get a bit higher payment this season, but most would prefer to have an open market with their biggest export customer.

Chinese cotton prices on the Zhengzhou Commodity Exchange closed limit down at their lowest in more than 10 years on Aug 5., pressured by weak US prices for the fiber and escalating trade tensions. The front-month contract has lost 14% so far this year and is down almost 33% from 18,900 yuan a tonne in May 2018.

The trade war with the US has caused a slowdown in China’s textile industry. Exports account for about 12% of textile sales in China with the US as the largest destination, according to China’s National Bureau of Statistics. The August WASDE report further lowered the USDA’s estimate of China’s 2019/20 domestic use to 40 million bales, down from an initial estimate in May of 41.5 million bales.

Still, imports are expected to continue rising this year as China seeks to offset liquidated state stocks and fill the demand for higher quality international cotton. Imports jumped 72% year over year in the 12 months ended in June to 9.5 million bales. But the US share of that dropped to 17.5% from 46%, while imports from India, Brazil, and Australia more than filled the gap, according to data from China’s customs agency.

Indian farmers struggled with dry conditions earlier this summer as the monsoon was slow to arrive. Some farmers shifted their plots to cotton, which is more drought tolerant than other crops. Producers shifted out of soybeans and pulses in Maharashtra state, and away from coarse grains in Rajasthan, to plant more cotton.

Total Indian planted area for cotton reached 9.6 million hectares as of July 19, which was 4% higher than last year and 5% above the five-year average. Monsoon rains improved in July, which increased planting progress in all crops.

The annual monsoon typically covers the majority of the country by June 15. This season the onset was delayed by two weeks, leaving the soil parched, as seen on the left map. Monsoonal rainfall has been well above average for the past four weeks, bringing the season-to-date total above normal and with greatly improved soil moisture, as can be seen on the right map. Click on the image to go to an interactive display on the Gro web app.

India’s textile industry is facing a prolonged slowdown due to excess spinning capacity and weak export demand for yarn. The Northern India Textile Mills Association estimates that nearly one-third of spinning capacity across India has been shuttered. The group blames high taxes for making the industry uncompetitive globally, while cheaper imports of garments and yarn from Bangladesh, Sri Lanka, and Indonesia are exacerbating the problem. India’s cotton yarn exports were down 33% in the second quarter from a year earlier.

Domestic cotton prices will need to fall further to make India competitive on the export market and to improve margins for domestic spinners in order to clear some of the excess stocks.

Brazil’s farmers are about halfway through harvesting what is expected to be a record crop of 12.4 million bales, up 34% from last year, according to CONAB, a government statistics agency. High domestic prices last year, bolstered in part by weakness in the Brazilian currency, led farmers to increase planted area by 37% this season, the highest amount in nearly 30 years. Now, lower world prices and a huge crop have caused domestic prices to decline 23% so far this year.

The chart on the left shows the huge jump in production (blue bars) for the current crop in Brazil. The combination of a 37% increase in planted area and record yield (green line) resulted in a bumper crop. The chart on the right shows how high producer prices were in the middle of last season and how, despite a pull back by the end of the year, farmers were seeing relatively high prices when making planting decisions. The recent fall to multiyear lows was quite sharp. Click on the image to go to an interactive display on the Gro web app.

Brazil is aggressively marketing its output globally, and appears to be taking market share from the US. The Mato Grosso Institute of Agricultural Economics estimates that 80% of the season’s output from Mato Grosso state has already been sold. Monthly exports were already running at record high volume every month since November following last season’s large crop and the increased demand from China. With the new crop becoming available, Brazil will look to carve out a larger share of China’s imports and compete with the US elsewhere.

China has become the largest destination for Brazil’s cotton. If the trade dispute between the US and China extends through the marketing year, Brazil’s exports should get a further boost, but it would be some time before large exports could eat through the massive crop being harvested. In addition, logistical constraints will limit the capacity to move cotton as it competes for truck and port capacity with corn and soybeans. As a result, domestic cotton prices will only be driven higher by rising international prices or if the currency were to significantly weaken.

Global production prospects for cotton are looking good. There is still potential for late rains to lower yield or quality in unharvested fields in several major producers, but that is unlikely to seriously dent global supply. A resolution to the US/China trade dispute would certainly push prices higher, whereas recent pessimism over the state of negotiations contributed to the latest price declines. There are ample global supplies to easily handle any increased demand from China, so it seems a sustained rally in cotton prices would have to wait for crop disruptions next season, or an extended period of low prices that significantly reduces planted acreage for next year’s crop.

For Cinco de Mayo, US Avocado Import Volumes Jump as Much as 48%